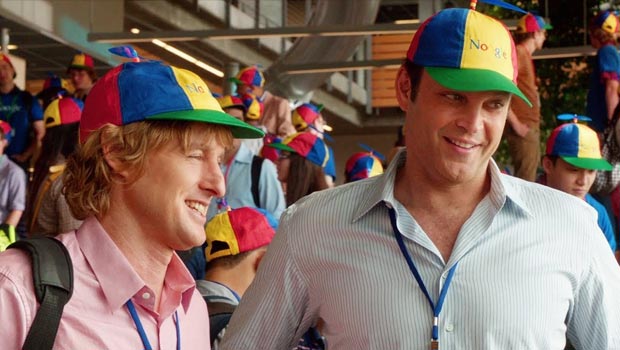 The Internship is 119 minutes of Vince Vaughn licking Google’s google. Not since Mac and Me has a movie loved a corporate entity this much. Characters extol the importance of Google’s work as tears fill their eyes, the company’s California HQ is displayed as a primary-coloured paradise, and even the end credits are a product demonstration slideshow. However idolatrous the praise, I doubt Google will be pleased with the film – I don’t see the publicity advantage in portraying your whole company as retarded.

You can imagine how this was made – some studio drone noticed the internet was trendy and new, but obviously they needed an established property to make it sell. “I hear the kids are using this Facebook thing?” “No, they already did that.” “What about Google?” The result is the blandest formula crap released this year, and is guaranteed to be liked by no one.

Another character is stereotypical Asian-American nerd, Yo-Yo (Tobit Raphael), complete with requisite overbearing mother. When Yo-Yo gets something wrong, he punishes himself Dobby-style by yanking hairs out his eyebrow. This becomes a running joke, so that following a particularly stressful encounter one eyebrow has been plucked bare. Owen Wilson draws on a replacement with marker pen. Good to see that self-harm jokes are still in fashion.

Every member of the cast is a one-note character. Rose Byrne as a pointless love interest might as well be a cardboard prop. Antagonist Max Minghella was already in The Social Network in a similar role – you might have thought the practice would help, but he’s possibly the worst thing in the film. The best thing in the film is Jessica Szohr‘s crotch, encased in a kinky red number as she does a sexy dance.

Said crotch appears in the key team-bonding scene, where the plucky interns come together through the power of alcohol and lap dances. They end the night overlooking the Golden Gate Bridge, and Cynical-Intern (Dylan O’Brien) unironically proclaims it The Best Night of His Life. I wanted to throw my shoe at the screen.

I have a special affection for Owen Wilson, which even this film cannot diminish. At least he has the class to look embarrassed about being there. The guy co-wrote Rushmore, how can I ever stay mad at him? He will in time be an accomplished director, and when everyone else starts jumping on the Wilson bus, I will be able to proudly say that I was on for the long-haul. He does have a very annoying voice though.

Director Shawn Levy has a track record of producing dreck (Cheaper by the Dozen, The Pink Panther remake), but I’m blaming Vince Vaughn for this one. He gets producing and writing credits, as well as the majority of the film’s most unpleasant moments. When Vaughn plays the straight man (for example, Dodgeball) he can be bearable, but his constant wise-cracking here just comes across as desperate.

Vaughn is 43 years old, but looks over 50. The frequent gags about him being old and obsolete therefore cut closer to the bone than intended. The entire film is hopelessly out-of-touch, treating the internet as a futuristic novelty. The whole style of comedy is outdated; it has no hope of competing with edgier, modern comedies like This Is the End. Apatow killed the Wedding Crashers star.

Do not watch this film. You will not enjoy it, you will be demeaning yourself and you will be damaging humanity. It is no use condemning the studios for producing rubbish like this – they just respond to audience demand. You have an opportunity to influence future film production by not spending money on this movie. It is the moral thing to do.