Win a copy of Planet Ocean on Blu-ray with CinemaSauce.com 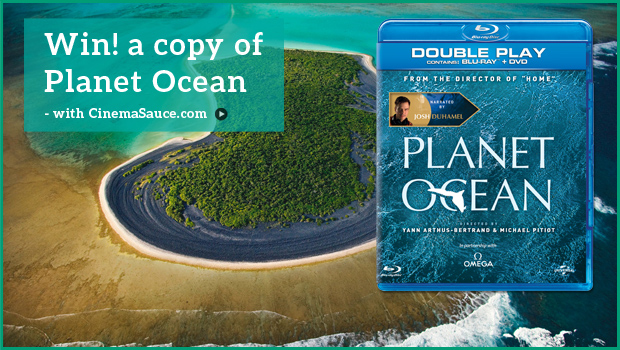 CinemaSauce.com are giving away one copy of Planet Ocean to giveaway to our fans. All you have to do is fill in your details at the bottom of this page and a winner will be chosen on 30th April, 2013.

Planet Ocean is an international documentary directed by Yann Arthus-Bertrand and Michael Pitiot. This 90 minutes HD documentary is produced by Hope Production in association with the Tara Foundation and in partnership with the Swiss Luxury Watch Manufacturer, OMEGA.

Thanks to its astonishing aerial photography filmed by Yann Arthus-Bertrand, and award winning underwater cameramen, the film takes us on a magnificent and unprecedented journey into the heart of the least known regions of our planet.

Written also by Michael Pitiot, in collaboration with a unique pool of researchers, oceanographers and biologists from several countries, the film narrates the links between man and ocean, the future of humankind on Earth, the governance issue of the high seas and challenges we’ll have to face tomorrow.

The Premiere is held at the United Nations Conference on Sustainable Development in Rio de Janeiro the 19th of June 2012.

“Planet Ocean” will then have a worldwide distribution on TV channels and will be distributed free of charge to educational networks, public institutions and NGOs.