Our beloved wookie Peter Mayhew, the actor who plays Chewbacca, had quite the hair-raising experience at the airport on his way home from the Denver Comic-Con when his lightsaber shaped walking stick was taken away from him by airport officials. Following a message Mayhew posted on Twitter telling his followers how Tsa officers “won’t allow me through the airport with my cane!” complete with supporting photographs from the airport security check, the Tsa thought it best to ‘chew’ their pride, restoring the lightsaber to its rightful owner.

Magic words to TSA are not “please” or “thank you”.. It’s “Twitter”.. cane released to go home.. twitter.com/TheWookieeRoar…

From The ABCs to the 123s of Death 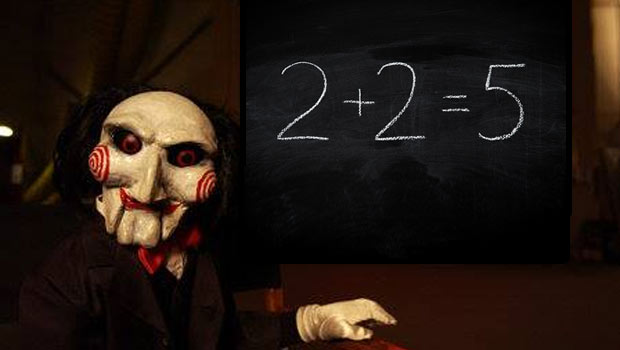 A sixth grade maths teacher has been suspended from a school in France after he reportedly showed James Wan‘s 2004 horror flick Saw to his class of 11-year-old-pupils. Jean-Baptiste Clement is reported to have told them “This will be your first horror film.” Following the incident Clement was reportedly called into a disciplinary meeting on Tuesday, where he was given a one-day suspension from teaching. The big question is what mathematical concept was the teacher trying to get across?

Many will remember thebeloved “Choose Your Own Adventure” books that played an oh so important part in our childhood. Readers chose their own paths as, every few pages, they are presented with various choices to make, with a page number to jump to depending on which option is chosen. 20th Century Fox believes they can adapt this idea into “a cross platform four-quadrant action-adventure franchise.” How on earth they intend to pull the idea off is beyond us and the most likely concept will involve Fox adapting the books directly, choosing the route they think would best work on the big screen. If that is the case then it kind of defeats the whole “choose your own adventure” concept but we’re hoping they can surprise us.

A new documentary entitled Spook Central claims that Ghostbusters is full of secret messages about smoking, obesity, and the reproductive process of Sigourney Weaver’s character Dana Barrett. This new documentary has been considered a hoax given the fact that it is said to have been directed by by Ivo Shandor (the name of a fictitious Gozer-worshipping cult leader who designed Barrett’s building in the film). However, the trailer certainly leads us to believe that it doesn’t look to be as much of a hoax as the director’s name would lead us to believe. You can also follow the Gozer-worshipping leader over on Twitter.

Finally, everyone must surely be excited with the limited release of Hatchet III on Friday so we’ll leave you with another much needed all-out gore-filled death clip from the film as Mr. Crowley does away with Hamilton, played by none other than Jason Trost. We’ll be revealing exactly what Kane Hodder (Victor Crowley) had to say to us tomorrow here on Cinema sauce. In the meantime enjoy this clip, best enjoyed whilst not at the dinner table.