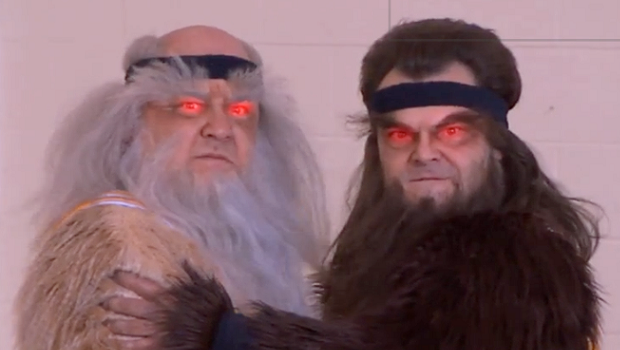 Appearing on Jimmy Kimmel Live last Thursday, actor/comedian Jack Black revealed Adult Wolf, a spoof trailer for a sequel to the 1985 cult movie Teen Wolf. With Michael J. Fox not reprising his role for Teen Wolf Too, Jack Black along with Kyle Gass (fellow Tenacious D band mate) took it upon themselves to show us what, in their eyes, Beavers basketball MVP Scott Howard and his Dad would be getting up to at this stage in life.

Black and company certainly put in solid performances and I for one would certainly look forward to a full-length movie of the Howards raising money for a full body wax, particularly in the midst of barrage after barrage of MOR spoof movies of late.

Apparently no camera trickery was involved for that slam dunk so no expenses would even be necessary for stunt doubles. What do you think? Time to make a full-blown sequel out of this one?

Check out the trailer within a trailer below: