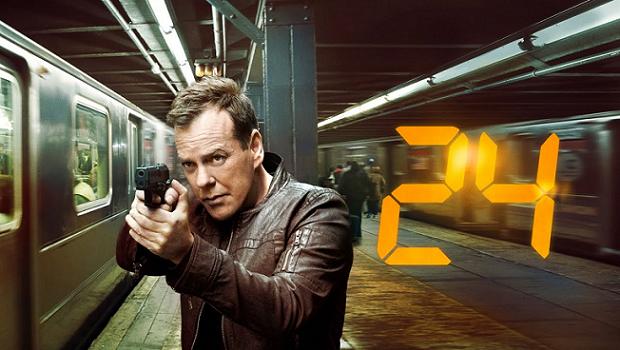 Despite recent announcements that Jack Bauer would not be back for a 24 movie, at least for now,  Fox is currently in discussions with Kiefer Sutherland to reprise his role, bringing 24 back into action as a limited series. The actor is negotiating bringing CTU’s Jack Bauer out of retirement as part of Fox’s recent focus on limited event series.

Homeland exec producer Howard Gordon, also a longtime 24 showrunner has reportedly pitched an idea for 24 starting from scratch with a whole now story arc for Sutherland’s character. Both 20th Century Fox TV and studio-based Imagine TV have now got involved. Sutherland is currently free to join the cast in the light of today’s cancellation of the series Touch after just two seasons in spite of the recent creative reboot implemented for series two with the additions of Maria Bello, Lukas Haas and a long list of both recurring and guest starring roles.

Based on a recent tweet from David Fury, a former executive producer of 24,  he will be also be involved in the new mini-series whilst “pulling double duty along with Tyrant,”

Are we all comfortable with an all new Jack Bauer story arc? Cinema Sauce is certainly looking forward to seeing him back on the screen.