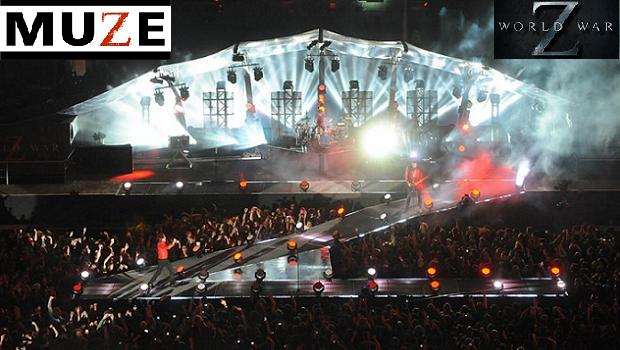 Take  cover as the countdown begins. Hordes of zombies are swarming perilously closer with World War Z releasing on the 21st of this very month of June. Straight after last Sunday’s world premiere for the movie, which took place in the very heart of London, rock band Muse performed a pulsating free live performance at the Horse Guards Parade. There’s no need for everyone to miss out on the action as you can now listen to a clip of Matt Bellamy and troubadours performing a blistering live version of ‘The 2nd Law: Isolated System,‘ the curtain closer from 2012’s eponymous album The 2nd Law. All visuals featured in the clip are taken from World War Z out 21st June 2013.

A second video below features Brad Pitt commenting on Muse’s participation in the film’s soundtrack with him describing how the production were after music akin to Mike Oldfield‘s Tubular Bells that went on to become the legendary theme for the 1973 cult horror film The Exorcist.

Be sure to watch out for swarming zombie takeovers on Instagram in the run up to the release of World War Z. Perform an Instagram search using the hashtag #WWZMuse to discover not only snapshots taken at last week’s Muse gig but also some exclusive #WorldWarZ images! Make sure you get involved.