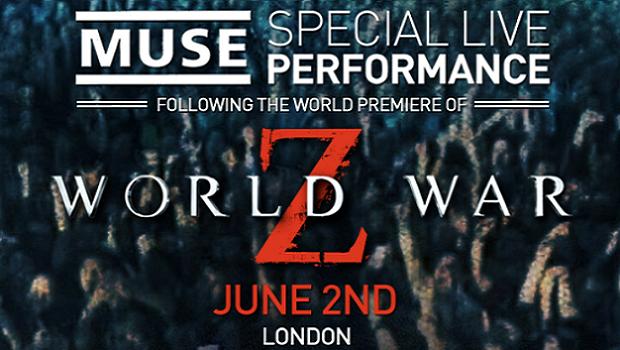 Paramount Pictures has decided to team up with a little UK band some of you may be familiar with, Muse, featuring a number of tracks from their latest chart-topping album The 2nd Law in the upcoming film, WORLD WAR Z. The film’s London premiere will take place on June 2 in Leicester Square followed by a live concert performance by Matt Bellamy and co. from Horse Guards Parade Ground, St. James’s Park.

The concert tickets will become available for free, Tuesday, May 28 at 9:00 a.m. BST via a special ticketmaster link and code here as well as via the Muse email list and various partner promotions so keep your eyes peeled.

Visit the following link for further details and to get hold of tickets: http://www.worldwarz.co.uk/MUSE

The Marc Forster directed WORLD WAR Z hits cinemas on June 21 and follows an ex-United Nations investigator Gerry Lane (Brad Pitt), crossing the world in an attempt to eradicate a pandemic that is toppling armies and governments and threatening to destroy humanity. Pitt stars alongside Mireille Enos (The Killing) and James Badge Dale (Iron Man 3).

Given Matt Bellamy’s penchant for end-of-the-world lyricisms it’s no surprise Universal opted to feature some of their latest tracks in this zombie epidemic epic. Get ready for the premiere and concert this June 2 as it’s going to be Ma,ma,ma,ma,ma,ma,madness…..

We’ll leave you with a special video produced in celebration of this once in a lifetime collaboration.